In Memory of Dianne Davies

on 26th August 2016, we lost a valued and much loved member of our club. Along with Dianne's family & friends, many members of PACC contributed to the GoFundMe campaign to assist with costs associated with Dianne's treatment in Melbourne. After the family paid for everything Dianne needed up until she passed away, there was a considerable amount left which, as per Dianne's wishes, was donated to the Leukaemia Foundation. As a result of this donation, the Leukaemia Foundation have laid a paver in their courtyard in memory of Dianne.

Graham & Jane would like to thank everyone so much for caring so much, for being so generous and for helping Dianne' s memory to live on.

The Port Adelaide Camera Club is that much richer for Dianne's enthusiastic and inspirational contribution: her presence is greatly missed. 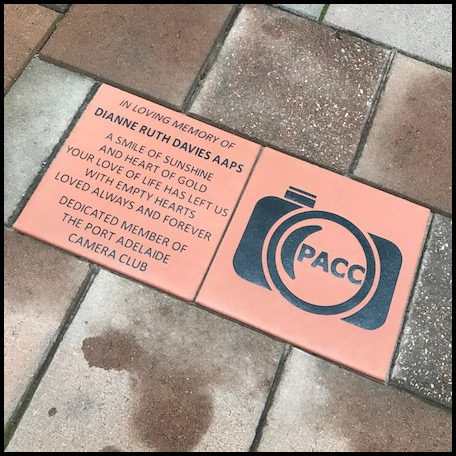 Email ThisBlogThis!Share to TwitterShare to FacebookShare to Pinterest
Labels: Dianne Davies, In Memorium