Member Profile: Getting to Know ..... 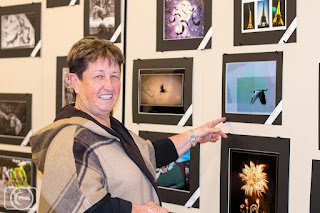 The reason I got into Photography was I saw my daughters Canon 400D. I picked it up just to look at it, it felt good in my hands; it was well weighted, took a couple of pictures outside. I knew then I had to have one; bought one and from there I have never looked back.

What do you shoot with?
I shoot now with a Canon 7D with multiple lens. I now have also gone to a lighter one, Olympus OMD M-1 with multiple Lens. I still prefer the Canon.

What is your favourite subject, and Why?
I love to shoot Landscapes and zoo animals. The reason I love the outback as it is a beautiful country and the colours are superb. I love the big cats as they are the ones I love the best. They are a majestic beast to the point I would love to own one. When I was a little girl I always wanted a black Panther .... as my family used to say “Dream on” .... but I will shoot anything at anytime or place.

What is your most memorable photographic moment?
I think it was about 6 years ago I took a course at the WEA, Learnt nothing. I met Grant Allen there and he told me about the Port Adelaide Camera Club. Now known as the PACC. He also said that you learn more at a club then you do doing a short course .... he was right.

What is your favourite image, and Why?
The most Memorable Photographic experience was about 2 months after I got the 400D, I went to the Dubbo Wildlife Plains. I walk around the whole complex and was just about to leave when I walked past the lions enclosure and the big cats were making a lot of noise (I think it was feed time) the lionesses were making the racket as they could hear the keeper on the other side. I had the 400D with me at that time with the 300mm lens on. I watched one of them walk around went up and tried to pick a fight with the lion but he was not having anything to do with her. She then walked slowly down to the water edge looked at the water then snorts the water a couple of time then started to drink, you could see her tongue lapping up the water, as you can imagine the camera was going wild. I took photos of every move she make from the top of the enclosure to the water hole. I had one printed for the club and when it was time for the judge to look at mine, he just stood there, he’s exact word were “I don’t normally like Dapple light.... 10” and then the judge said “I can’t fault it”. I was as proud as punch; I put it on canvas and on my wall and it is still there. I since have been back to Dubbo but nothing like that again. 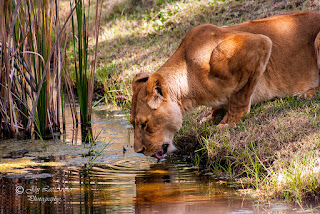 Email ThisBlogThis!Share to TwitterShare to FacebookShare to Pinterest
Labels: Getting to Know You, Member Profile